Between the curiosity cabinets of museum archives of Mark Dion to the fictional taxonomies of British artist Robert Williams, there has been a heavy trend amongst contemporary artists to collect, arrange, and sift through archival material. Therefore, it is no surprise that the Emergency Room, Rice University’s most recent contemporary art space for emerging artists, would exhibit the comic book collection of Robert Boyd. Boyd is an alum of Rice (Wiess ’92), was an editor at a number of comic book publishers in the 90s, and runs the art blog The Great God Pan is Dead. From a collection much larger than the thirty comic strips that the Emergency Room’s relatively small size commands, Boyd has whittled down his collection, curating the components that he deems most as “comics art worth collecting.”

The Emergency Room is a shallow space. Upon entering the glass doorway, the length to the opposite wall can’t be more than, say, six feet. The width is about eight, and the height proportionally towers over the viewer at about ten. This is the kind of space that pleads for a salon style viewing, yet Boyd and director Chris Sperandio cleverly and adeptly reject that impulse. The exhibition could have easily turned into a menagerie or spectacle; Boyd, however, gives the viewer a sense of pointed and appropriate didacticism with methodically arranged comic strips on matte board and even a vitrine housing comics dating from 1937-2009. This arrangement commands the viewer to investigate each strip as an historical artifact as opposed to engaging with the full installation experientially. As the viewer engages with each comic individually, she begins to enthrall herself with the residue of the strips’ time periods. The eye becomes immersed in the palimpsest and course corrections of Walt Kelly’s Pogo December 5, 1951 and August 9, 1954. Or saturated in the opacity of the blacks of the carpet in Chester Gould’s Dick Tracy January 2, 1947 and February 2, 1947, or the pants in Frank King’s Gasoline Alley December 3, 1949 and December 21, 1950. The juxtaposition of the multi-colored comic The Bungle Family February 27, 1927, with the other black and white comics in the center wall gives it immense depth and seduction.

Boyd advocates for alternative comic strips, intending to raise our awareness that other comic strips exist outside the ones that Hollywood routinely disseminates to the public. A comic strip is not solely a method of entertainment—it is an art form. And really, that art form’s purpose is not solely aesthetic pleasure—it is a consideration of history. Also, it is a strategy used to challenge vanilla cultures, as exemplified with Love & Rockets 1982-1996, and Dykes to Watch Out For 1987-2008. Due to Boyd’s concerns and lofty ambitions of what comics can and should do, his curatorial efforts become paramount. The majority of his picks are poignant and effective except for “The Economics of Scale” 1993. The strip quite literally illustrates and discusses the issues at hand, like the possibility of the comic book strip becoming irrelevant and dying as an art form, instead of encompassing notions of history and culture. Additionally, it is specifically addressed to Boyd from artist David Collier at the bottom of the page. This diffuses the exhibit’s power as an historical doctrine and serves as a disappointing reminder that this is just some dude’s comic book collection.

Despite minor hiccups, Comics: Works from the Collection of Robert Boyd effectively provides aesthetic engagement, historical curiosities, and asks questions. Perhaps the most poignant question it asks is why this stuff isn’t taken more seriously in the art world. To Boyd’s credit, he makes a fairly strong case as to why it should.

Minimalists sought reductive theatricality, where the relationship between the viewer and the object was heralded as the only element that mattered. According to Donald Judd, these objects he and other Minimalists created were just that—objects, not sculptures. The inherent problem with a sculpture (as well as painting) was that, at least in the advent of Modernism, it was created for its own sake. It was an encapsulation of emotion and attempted transcendence; its purpose was so that the viewer could experience the moment along with the piece. The Minimalists, on the other hand, distilled their work down to just the experience or presence of the object and the viewer in a particular space.

In Specific Objects, Judd denigrates the previous traditions of painting and sculpture. He declares, “Painting and sculpture have become set forms. A fair amount of their meaning isn’t credible.” But if we are to equate reduction with credibility, what could possibly be credible about such a contrived circumstance?

Let’s start with the objects themselves. Despite appearances, these objects are far from reductive. They, of course, aren’t simplified objects plopped down somewhere in the world for any given person to deal with—these are highly refined objects manufactured by numerous highly skilled laborers in a factory. While the schizophrenic form of an Abstract Expressionist painting was made with a single hand, a Minimalist form implicates not only the artist but also an entire labor force.

Then, of course, we are left with the viewer. In a multiplicitous world, we are increasingly recognizing a human being and its cognitive abilities for what it actually is: a complex integration of biological and sociological constructions. So if both sides of the equation are fraught with questions—questions of authenticity, originality, reductive capacity, and cognitive precision, what do we make of the relationship between object and viewer?

If Minimalism is not actually reductive, it begs the question: what is? The answer must be to disseminate the viewer + object = relationship equation altogether. By dissolving the encapsulating constructions that comprise each component of said equation, we are unfurling and thereby reducing them to their essence, which is essentially nothing at all.

If one were to peel back these constructions one by one, the core that would be left would be an infantilic mind driven solely by impulse and acts of randomness. There would be no relationship because there would be no object. And really, there would be no viewer either. What would be left are a series of actions that may or may not relate to one another. This obviously leaves us with an enormous problem in the realm of analysis. If all three components of the equation are obliterated, including ourselves (the viewer), what’s left to talk about, and how can we talk about it?

People from both the distant and recent past have intellectualized and examined the abject as a legitimate form for consideration. Take Georges Bataille:

Thus a love life started between the girl and myself, and it was so intimate and so intense that we could hardly let a week go by without meeting. And yet we virtually never talked about it. I realized that her feelings at seeing me were the same as mine at seeing her, but I found it difficult to have things out. I remember that one day, when we were in a car tooling along at top speed, we crashed into a cyclist, an apparently very young and very pretty girl. Her head was almost totally ripped off by the wheels. For a long time, we were parked a few yards beyond without getting out, fully absorbed in the sight of the corpse. The horror and despair at so much bloody flesh, nauseating in part, and in part very beautiful, was fairly equivalent to our usual impression upon seeing one another. Simone was tall and lovely. She was usually very natural; there was nothing heartbreaking in her eyes or voice. But on a sensual level, she so bluntly craved any upheaval that the faintest call from the senses gave her a look directly suggestive of all things linked to deep sexuality, such as blood, suffocation, sudden terror, crime; things indefinitely destroying human bliss and honesty. I first saw her mute and absolute spasm (which I shared) the day she sat down in the saucer of milk. True, we only exchanged fixed stares at analogous moments. But we never calmed down or played except in the brief, relaxed minutes after an orgasm.

I feel a pain spreading from m/y fingertips to m/y wrists extending the length of my arms as far as m/y throat making m/y chest burst.  It is at that moment that I spit a part of m/y right lung a soft bland mass to the back of m/y throat and palate.  I take it between m/y fingers, I pull, I wrench it out, I hold it pale pink still living before your eyes, I shake it, I squeeze it, I crush it on your skin against the pearl-shaped weals ranged one beside the other.  M/y left lung comes in its turn into m/y mouth, in fragments, its bulk chokes m/e in passage its elastic substance touching m/y teeth, I bite it, I chew it, I swallow it, I spit it out, I spread it from the edge of m/y lips over the entire surface of m/y body.

Second wave feminism of the ‘60s and ‘70s called for a radical rethinking of the notion of “woman,” particularly in respect to heteronormative structures. The nature of the times provided a breeding ground for unconventional texts such as Wittig’s to be received. While Bataille used the abject to uproot psychosexual norms, Wittig used it as a metaphorical display of intimacy. It is an historical given that queer relationships were designated as “other”; therefore, it is unsurprising that she would depict the otherness of a lesbian relationship with an abjective otherness. The abject here seems to become a stamp of ownership: only two women could know a love this raw and frustrated and disgusting. 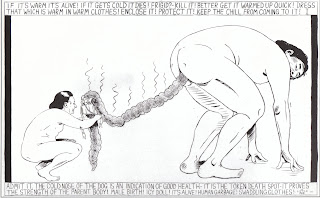 The ‘80s and ‘90s sustained an explosion of Postmodernist thought and theory. This was a period of multiple truths and fluid paradigms. So why the hell not? Let’s draw steaming turds dressed in baby clothes. This cavalier and punk attitude toward the art world, as well as what art can and should be was a recurring theme throughout this time, but I think Kelley was interested in more than just that. If Postmodernism blanketly rejects linearity, then it would be logical for him to understand humans less as people guided by a modular consciousness and more as animals essentially guided by impulse—as if we are no better than dogs who eat garbage and lick their own assholes. In this respect, Mike Kelley’s work is quite reductive.

It appears as though the cyclical utilization of the abject as a reductive tool has dismantled the Minimalistic myth, since, well, before Minimalism even existed. But has it? Intellectualizing and voicing the abject via textual and visual culture raises an immediate concern: does it not simply become another recycled contrivance? If the abject itself acts as an agent to disseminate the object into a series of non-sequitur parts, what does that say about the language and images we use to describe the abject? Because they are indeed descriptions, they can only serve as surrogates and icons of the intended reduction. Therefore, the viewer + object = relationship equation does nothing more than replace itself with the same equation of different words: abject + discourse = science. Ultimately we are left with another failed attempt at getting to the bottom of things.

What are we to do with a seemingly endless and impossible loop of linguistic and visual equations? Through Modernism we prayed to linearity and to answers, and also to advancement. That linear thinking led us precisely into an abyss commonly known as Postmodernism: a stance of multiple answers and heterogeneous thinking, all right and all wrong. But I think we’ve moved past both, where the answers are irrelevant and the process of deriving equations becomes the answer. It’s quite possible that what reduction really is is a discursive modernism, where the cyclical process of buttressing and degradation of answers is the distilled, encapsulated whole.